At some point, you may have heard some negative talk about hard water. While this negative talk is certainly well-deserved, you might not quite understand it. You may ask yourself, “why does hard water have such a bad reputation?”

If you’re really interested in knowing the answer, you’re in the right place. In this post, we’ll not only discuss what hard water is, but we’ll also discuss its many negative effects.

What Exactly is Hard Water?

While hard water is entirely safe to drink, it’s far from ideal. In addition, hard water carries with it a variety of negative effects, slowly damaging all of the appliances with which it regularly comes into contact. Let’s discuss its negatives in more detail below. 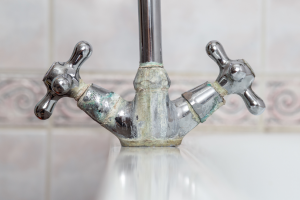 One of the most common problems you’ll encounter when using hard water is limescale buildup. Limescale is a white, chalk-like substance that can appear on metal appliances, doing little to impair their functionality, but doing quite a bit to impair their aesthetic.

Limescale comes about when hard water dries on a surface. As water molecules evaporate, small particles of calcium and magnesium are left behind. While they can be scrubbed off fairly easily, they can’t be eliminated entirely without the use of a water softener.

Hard water has been known to cause a lot of damage to water pipes. Over the years, as calcium and magnesium pass through pipes, they begin to cling to the insides of said pipes. The more time that passes, the more these minerals build up atop of one another.

Eventually, the buildup can become so extreme that water will actually struggle to flow. It’s at this point that a full pipe replacement might be necessary.

Another negative associated with hard water is high utility bills. Hard water causes your utility bills to be high because it causes water appliances to work much harder than they otherwise would.

When the inner mechanisms of your refrigerator or dishwasher are forced to handle excess amounts of calcium and magnesium, they take on a great deal of strain, running inefficiently. This not only results in costly utility bills, but a premature breakdown of your appliances as well.

The fact of the matter is that calcium and magnesium possess a taste. Most individuals would describe this taste as bitter. In essence, though hard water is safe to drink, it’s not always the most desirable choice of beverage.

Looking to Do Away with Hard Water?

Are you dealing with hard water in your Kildeer home or business? Looking to do away with it? If so, we here at Johnson Water Conditioning are the people to see.

We supply and install water softeners of all sizes, removing hard water minerals from your water so that it’s as pure and as usable as possible.