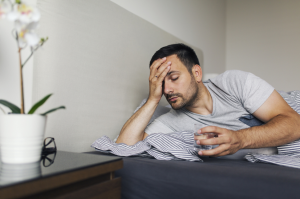 However, do you know about hard water’s effect on the human body? Though it’s not dangerous to use or to consume, hard water does have some negative effects.

Wondering how exactly hard water affects the body in Lemont, Illinois? Read below to find out!

Hard Water and the Human Body:

When hard water is used to wash the skin, it leaves behind microscopic particles of calcium and magnesium. These particles attach to the surface of the skin, clogging up pores, and making it very difficult for those pores to secrete vital body oils.

What’s the result of this? The skin becomes dry and itchy, and can sometimes even take on a rash. Everyone is vulnerable to hard water-induced skin dryness; however, those with eczema are especially vulnerable.

Because the hair becomes dry and brittle, it also becomes very difficult to style. The calcium and magnesium minerals essentially damage the hair, preventing it from curling, swaying, and waving in a natural manner.

Detecting Hard Water in Your Home:

Does Your Soap Fail to Lather?

A sure sign that you’re dealing with hard water is if your soap is struggling to lather and suds up. Whereas soft water yields a high amount of soap suds, hard water does the opposite.

Is There Limescale on Your Faucets?

In most cases, when hard water is used, it leaves a white, chalky substance behind on all of the surfaces that it touches. This substance is known as limescale, and it is the evaporated remnants of the calcium and magnesium particles that exist within hard water.

Do Your Clothes Feel Scratchy?

Another fairly common sign that your water is hard is if your clothes come out of the washer and dryer feeling stiff and scratchy. When the calcium and magnesium in hard water cling onto clothes, they compromise the fibers of those clothes, preventing them from flexing and forming in their natural state. Thus, stiffness and scratchiness ensue.

Interested in Installing a Water Softener in Lemont, Illinois?

The only sure way to avoid the negative effects of hard water is by avoiding hard water altogether. How can you avoid hard water in your home? By installing a water softener.

Interested in installing a water softener in Lemont, Illinois? If so, Johnson Water Conditioning Company is the company to call. As the premier manufacturer of water softeners in the Lemont area, we have helped thousands of satisfied customers to soften their water.