You may think that water purification is a relatively new trend, but the truth of the matter is that human beings have been purifying water for thousands of years. 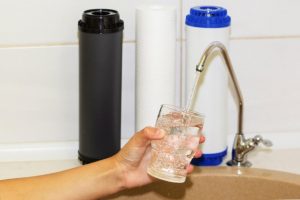 The first recorded use of water purification happened around 2000 BC. At this point, the process was primitive, to say the least. Water purification simply involved boiling water and then filtering out large sediment through a filter.

For around 1,500 years, water purification was no more complex than boiling and straining water. But in 500 BC, there was a bit of a breakthrough.

What was that breakthrough? The first legitimate water filter! Made in Greece by the famous scientist Hippocrates, it was given the name “the Hippocratic sleeve.”

This was a fairly rudimentary invention; essentially just a cloth bag through which you could dump water. But it was certainly a step up from the boiling and straining process that occurred before it was invented.

Again, for over 1,000 years, no improvement was made in water purification. In fact, very little interest was shown in doing so. But in the 1600s, Sir Robert Bacon began experimenting with sand filtration, attempting to filter salt out of water from the sea.

Bacon’s efforts spurred on other inventors and scientists to try their hand at water filtration. The ball was rolling, in a sense.

The 1700s brought the invention of the microscope, and with its invention, human beings were first able to see that there were microscopic organisms living in their water. In an attempt to filter out these organisms, filters made out of charcoal and sponge came into use.

While these filters were not perfect, they were certainly an improvement on anything that had come previously.

The 1800s marked the very first time that water was treated with chemicals. This came at hands of doctor and medical inventionist John Snow. Snow discovered that hundreds of people in London were dying from cholera in their water.

By adding chlorine to the water source, he was able to neutralize the existence of cholera. This innovation would be a huge turning point for water purification technology.

In the 1900s, water purification hit its apex. Everything from water softeners, to chlorine injection systems, to reverse osmosis systems were invented.

These implements were able to purify water to levels that it had never been purified before. This lead to healthier water which made the world a much safer place.

Water purification was not only encouraged, but legislated by governments. These large-scale purification efforts have lead us to where we are today. Today, when we take a drink out of a faucet, we don’t even stop to think about whether or not our water is safe. We just know that it will be. Although the water may be safe, it does not mean there are not minerals in the water that can be problematic.

Perhaps you’re yet to benefit from water purification? Maybe you’re looking to remove iron, manganese, and other hard minerals from your water? If this is the case, we here at Johnson Water Conditioning are the people to see.

In business since 1936, we’ve seen water purification methods transform substantially over the years. All the while, we’ve been on the cutting edge of implementing those advancements. We know just about everything there is to know about water purification and apply that knowledge to our clients in the Napervile and Medinah area every day.