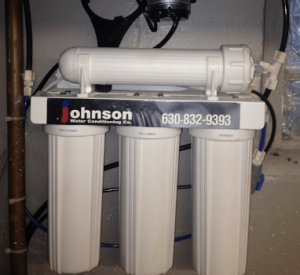 Are you considering installing a water purification system in your Naperville, Illinois home? Not sure which is best for you? If you get your water from the municipal supply, you would be best served by a water softener and/or a reverse osmosis system.

Curious as to the differences between these two systems? Wondering what each can do for you? We’re going to compare them below.

We’ll begin by comparing the tastes produced by the two systems. The difference is fairly easy to detect, though there might be some disagreements as to which one is superior.

Reverse osmosis systems produce water that is exceedingly smooth and clean. This stands to reason, as these systems remove the vast majority of contaminants from their respective water supplies. The end result is water in its purest form.

Water softeners, conversely, keep the majority of the contaminants that are contained within their respective water supplies. Therefore, if the water contains a great deal of iron, for example, it will retain its metallic taste.

Neither taste is considered to be unbearable. In the end, it comes down to personal preference.

When it comes to efficiency, there’s no contest. Water softeners are much more efficient than reverse osmosis systems.

The reason for this is simple: reverse osmosis systems aren’t able to purify every bit of water that runs through them. In fact, they get rid of more water than they purify. Water softeners, on the other hand, purify almost every trace of water that enters the system.

What this results in is a limitation on use. Water softeners can purify all of the water in a given home’s water supply. Reverse osmosis systems, on the other hand, are generally only equipped to handle drinking and cooking water.

Both water softeners and reverse osmosis systems produce a high-quality form of water. Where their differences lie is in the types of contaminants that they eliminate.

As such, reverse osmosis systems tend to produce the preferred form of drinking water. Not to mention, they can be used in tandem with untreated well water in order to eliminate any unsafe elements.

Reverse osmosis systems are fairly set-it-and-forget-it types of devices. They need to be cleaned every 6 months to a year, but they get by fine the rest of the time. Note, however, that their parts may need to be replaced periodically.

Water softeners don’t often need to be cleaned. However, they do need to be filled with softener salt every few weeks. This salt is vital to the sodium-ion exchange, which is the process that drives the system’s entire functionality.

Apart from this, you should keep an eye out for irregularities. Water softeners can take on problems from time to time, just like reverse osmosis systems.

Looking to Install a Water Softener or Reverse Osmosis System in Naperville?

We are well-versed in the installation of both water softeners and reverse osmosis systems. We can have your system set up quickly and correctly.