Whether you are aware of it or not, it’s highly likely that you’re dealing with some sort of impurity with your water supply. Maybe your water is hard? Maybe it’s inundated with iron? Perhaps it contains potentially harmful bacteria?

We will review 5 types of water filtration systems in Naperville, Illinois, and explain what each can do for you. 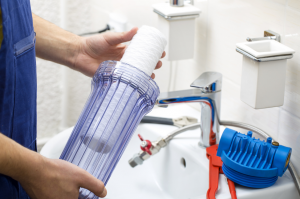 When excess amounts of calcium and magnesium exist within a water supply, that water supply is deemed to be “hard.” Hard water has a number of negative effects. Not only does it cause the slow destruction of water pipes, it does a poor job of washing as well.

Do you ever wish you had pure, restaurant-quality water in your home? If so, you can get it with a reverse osmosis system.

Hydrogen sulfide is a compound that is often found in well water. It’s typically responsible for creating the sulfur smell that is common in this kind of water. While hydrogen sulfide isn’t particularly harmful as it pertains to water, it can be unpleasant.

The good news is that there’s a device that can remove excess amounts of iron from your water: an iron filter. There are iron filters available to accommodate water supplies of all sizes.

Looking for a Water Filtration System in Naperville, Illinois?

Are you dealing with impurities in your water? Looking for a water filtration system in Naperville, Illinois? If so, the water conditioning specialists at Johnson Water Conditioning are the people to see.

We supply and install all of the water conditioning and water softening systems reviewed above. Whether you’re looking for a water softener, an iron filter, or a reverse osmosis system, we can accommodate you.

Contact us today to discuss your water conditioning needs!