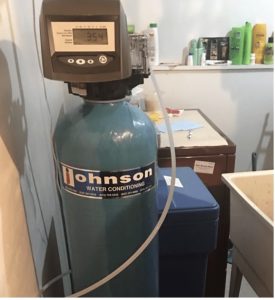 If you live in Batavia, Illinois, there’s a good chance that you have hard water running through your pipes. The soil in the Batavia area is filled with excess amounts of calcium and magnesium, and when water is brought up from the ground, it tends to bring this calcium and magnesium along with it.

The first benefit we’re going to discuss is the benefit of increased soap suds. Installing a water softener will literally increase the amount of suds you can produce when mixing soap with water.

However, when a water softener is used to remove calcium and magnesium from the water supply, the chemical reaction is allowed to happen at full force. This allows you to produce the optimal amount of soap suds.

When hard water passes through water pipes, it tends to leave calcium and magnesium particles behind. These particles attach to the interior walls of water pipes, accumulating over time. The issue with this is that, the more these particles accumulate, the less space there is for water to flow through. This can result in water pressure problems, and eventually, it can prevent the flow of water altogether.

Want to prevent this from happening? If so, you should install a Pentair water softener in your home. This water softener will eliminate all calcium and magnesium from the water, which means these particles won’t be able stick to the interior walls of your water pipes. If you’re ready to install one, your local Batavia water softening company can get the job done.

Less Stress on Skin and Hair

Though hard water isn’t unsafe to consume, it can still wreak havoc on the body. Namely, it can negatively affect the skin and hair. It not only causes the skin and hair to become dry, but it can also induce problems such as eczema, acne, and split ends.

As such, it’s best to remove calcium and magnesium particles from your water. Doing so will make the water “soft”, which can help improve your skin and hair. If you are interested in installing a Pentair water softener in Batavia, Illinois, the team at Johnson Water Conditioning would be happy to help.

Limescale is a pesky substance that comes about when hard water evaporates from a surface. It’s essentially just a small pile of calcium and magnesium particles, and it presents itself as a white, powder-like substance.

You’ll most commonly see limescale buildup on metal-based water appliances such as sinks and shower heads. This buildup causes no functional issues, but it’s not exactly something you want to see every day. As such, you can eliminate it altogether by installing a Pentair water softener.

If you’re tired of living with hard water, you can eliminate it from your home by installing a Pentair water softener. Are you ready to have one installed by the premier water softening company in Batavia, Illinois? If so, look no further than the experts at Johnson Water Conditioning.