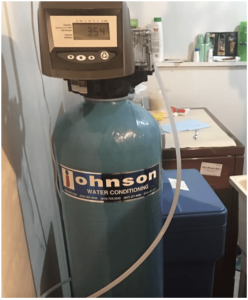 If you look closely at your sinks, showerheads, and other metal water-based entities, you might notice a white, chalky substance. If so, you are most likely looking at limescale.

Limescale buildup isn’t harmful in any way. However, most homeowners don’t like the look of it. As such, they choose to eliminate it by installing a water softener. A Pentair water softener will remove all of the calcium and magnesium from your water supply, thereby eliminating the risk of limescale buildup. If you want to eliminate limescale, your local Naperville water conditioning company can help.

As you might expect, this negatively affects your home’s water pressure. After enough time, hard water minerals can build up and close off a water pipe entirely, preventing water from flowing through.

With that said, if you want your pipes to remain functional, you’ll want to soften your water supply. A Pentair water softener will get the job done.

Protects Your Skin and Hair

Calcium and magnesium aren’t harmful to ingest. However, they can cause skin and hair problems for many people.

Calcium and magnesium particles often cling to the skin, which can block your pores and prevent the secretion of natural body oils. As a result, the skin can become extremely dry, resulting in problems like acne and eczema.

At the same time, calcium and magnesium can cling to the hair, causing it to become stiff. This can result in problems such as split ends and broken hair.

Want to avoid these problems entirely? All you’ll have to do is contact a reputable water softening company in Naperville and have a water softener installed.

Hard water and soap don’t exactly go together. Due to the calcium and magnesium content of hard water, the chemical reaction needed to produce soap suds is severely limited. This can be an inconvenience when you’re washing dishes or taking a shower, for example.

Fortunately, there’s a simple fix: you can install a water softener. By installing a Pentair water softener in Naperville, you can remove all the calcium and magnesium from your water supply, allowing you to produce ample soap suds with ease.

Are you interested in softening your water? Looking to install a Pentair water softener in Naperville, Illinois? If so, look no further than the professionals at Johnson Water Conditioning.

Over the years, we have installed Pentair water softeners in homes all throughout the Naperville area. As the top water conditioning company in Naperville, Illinois, we have a wide selection of water softeners that can accommodate homes of all sizes. Contact us today to discuss your needs.