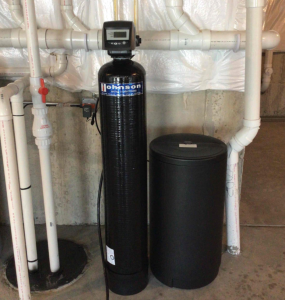 There are all sorts of ways that homeowners can benefit from installing a Pentair water softener. One of the most overlooked of these benefits is the added protection it offers to your water pipes.

What Effect Does Hard Water Have on Water Pipes?

At first, this will present itself in the way of reduced water pressure. Eventually, however, it can cause water flow to cease entirely. Once this occurs, you’ll need to replace your water pipes which is not an inexpensive project.

How Does the Pentair Water Softener Stave Off Pipe Buildup?

Now that you understand the way in which hard water affects water pipes, you’re probably wondering how installing a Pentair water softener in Deer Park, Illinois can help you avoid pipe buildup. To put it simply, the water softener removes calcium and magnesium from the water supply. If calcium and magnesium aren’t present in the water, most of the internal pipe buildup won’t occur.

This is facilitated with the use of resin beads. These beads hold onto sodium ions and then release them as water makes its way into the softener. While this is occurring, the calcium and magnesium ions take the place of the sodium ions, thereby exiting the water.

Once the water leaves the softener, it’s free of calcium and magnesium, and contains just trace amounts of sodium. Note, this sodium has no effect on the quality, taste, or consistency of the water. It’s not even noticeable.

Your only responsibility, as the owner of a water softener, is to add softener salt to the softener every two months or so. This will ensure that the resin beads stay loaded with sodium, allowing the ion exchange process to happen on a regular basis. If you would like, you can arrange for a Pentair water softening company in Deer Park, Illinois to maintain your system.

Are There Other Advantages That Come with Water Softeners?

You’re now aware of how a water softener can work to protect your water pipes. What you might be wondering, though, is if the water softener comes with any other advantages.

One of the biggest advantages to using a Pentair water softener in Deer Park, Illinois is that you’ll put less wear and tear on your skin and hair. As a result, you’ll have a reduced risk of acne, eczema, split ends, and the like.

Water softeners also eliminate limescale buildup, a white, powdery substance that shows up on sinks and showerheads. In addition to this, they prevent water-based appliances from becoming inundated with calcium and magnesium particles, thereby allowing them to run more smoothly.

Finally, they facilitate a full chemical reaction between water and soap. This allows for optimal soap sud production.

We have installed Pentair water softeners in countless homes and businesses throughout the Deer Park area. Regardless of the type of system you’re looking for, we can get it installed correctly. Contact us today to get started.