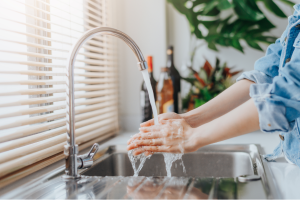 Most Oswego homeowners spend a lot of time and effort maintaining their living spaces. Of all the maintenance tasks around the house, one of the most time-consuming chores is cleaning. From dishes to countertops to floors and more, there is no shortage of things that need to be cleaned.

Unfortunately, if you have hard water running through your pipes, cleaning could be more difficult. That is why it’s wise for Oswego homeowners to install Pentair water softeners in their homes.

Are you interested in learning how a water softener can help with your cleaning efforts? This Pentair water softening company in Oswego, Illinois is going to explain below.

The Challenges of Cleaning with Hard Water

To fully understand the cleaning benefits of the Pentair water softener, it’s important that we first discuss the challenges of cleaning with hard water. Namely, it comes down to soap suds. In short, hard water doesn’t produce many of them.

As any Pentair water softening company in Oswego, Illinois can tell you, hard water contains excess amounts of magnesium and calcium. When soap contacts hard water, these two minerals stifle the chemical reaction that’s supposed to occur, the reaction that would generally result in ample soap suds. Therefore, instead of getting sudsy and soapy water, you get water with just a thin layer of lather over it.

To put it simply, the latter form of water doesn’t do a great job of cleaning. The lather doesn’t spread well and, therefore, tends to miss portions of whatever is being cleaned.

That is why most homeowners in the Oswego area prefer to soften their water. By softening your hard water, you will remove the magnesium and calcium from your water supply, which will allow for a full chemical reaction when mixing soap and water. This full chemical reaction, of course, will allow you to produce ample soap suds. If you are ready to install a water softener, you can contact your local Pentair water softening company in Oswego, Illinois.

What the Water Softener Does to Combat the Problem

We’ve already touched on this to an extent. Now, let’s go into a little more detail. We’ve established that water softeners remove magnesium and calcium from a water supply — but how do they go about doing so?

It all revolves around a process called ion exchange. In this process, positively charged ions are exchanged for negatively charged ions. With the water softener specifically, sodium ions are swapped for magnesium and calcium ions.

This is how it works in practice. The water softener contains resin beads. These beads are loaded with sodium ions (which are replenished every month or so through the adding of new softener salt).

Whenever hard water passes through the water softener, the sodium ions leave the resin beads, thus leaving space for the magnesium and calcium ions to cling onto the resin beads. They do this while small amounts of sodium enter the water.

Once the water has exited the water softener, it’s void of magnesium and calcium altogether, and it contains just trace amounts of sodium. It is considered “soft” at this point, and it will no longer impair the chemical reaction that occurs between soap and water.

One thing to note is that water softeners require some basic maintenance from time to time. However, by and large, they get the job done by itself. You can let them run for weeks without thinking about them. If you would like to learn more about the maintenance that’s involved with these systems, your local Pentair water softening company in Oswego, Illinois will be happy to explain.

Looking for a Pentair Water Softening Company in Oswego, Illinois?

Are you ready to eliminate hard water from your home? If so, and if you’re looking for a professional Pentair water softening company in Oswego, Illinois, do not hesitate to get in touch with the team at Johnson Water Conditioning. Contact us today to learn how we can help.