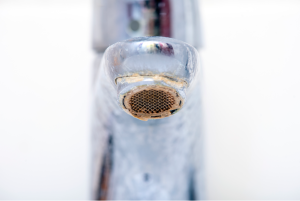 Are you interested in learning how a water softener can help eliminate limescale buildup throughout your home? If so, you’ve come to the right place. This Pentair water softening company in Medinah, Illinois is going to explain below.

First, you might be wondering: what is limescale? Limescale is a white powder that tends to appear on metal water-based entities such as faucets, shower heads, and the like. In essence, it’s an accumulation of calcium and magnesium particles.

How does it get there? Hard water is the culprit. When hard water evaporates, it leaves calcium and magnesium particles behind. These accumulate over time, presenting themselves as limescale buildup.

It is possible to clean limescale buildup with a simple rag and water. Note, however, that it will just keep accumulating over time. If you want to eliminate it entirely, you need to remove calcium and magnesium from your water. This is where a Pentair water softening company in Medinah, Illinois can help.

Water softeners are specifically designed to remove calcium and magnesium from water. Therefore, they’re able to totally eradicate limescale buildup within a home.

How Does a Water Softener Eradicate Limescale?

We’ve discussed that the water softener eradicates limescale. Now, let’s discuss how it does the job. It can all be summed up with a concept known as ion exchange.

When the water finally leaves the water softener, it’s void of calcium and magnesium. What it does contain is trace amounts of sodium. Note, however, that the effect of this sodium is minimal, and is generally undetectable.

To keep a water softener functional, your Pentair water softening company in Medinah, Illinois will recommend filling it with softener salt every one to two months. This salt replenishes the sodium deposits within the softener, allowing it to perform the ion exchange process.

You might be wondering: are there other ways to eradicate limescale in your home? Unfortunately, there are no other permanent options for eradicating limescale. The best you can do is clean the limescale as it appears in your home.

As was noted above, it will just keep coming back. Plus, you might have to use special limescale removers to get rid of it. This will cost you more and more money over time, and, at some point, will cost you more than what a water softener would have.

When you factor in the water softener’s other benefits (preserving water pipes, healthier skin and hair, etc.), it’s easily the superior option.

Looking for a Pentair Water Softening Company in Medinah, Illinois?

Are you tired of constantly cleaning up limescale in your home? Ready to have a water softener installed by the top-rated Pentair water softening company in Medinah, Illinois? If so, Johnson Water Conditioning is the company to call.

Our team has installed Pentair water softeners in countless homes throughout the Medinah area, helping them effectively eliminate limescale buildup. Ready to get started? Contact us to schedule an appointment.