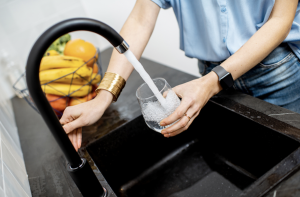 When water comes up from the ground, it often brings a variety of contaminants along with it. While most of these contaminants are safe for consumption, they still have a variety of adverse effects. For this reason, many homeowners in the Medinah area choose to install water conditioning systems.

The first conditioning system we’ll discuss is the water softener. Water softeners are used to remove calcium and magnesium from a water supply.

Calcium and magnesium are detrimental to water for a variety of reasons. Not only do they cause limescale buildup, but pipe buildup, skin and hair issues, and a lack of soap suds as well. Together, they work to make water “hard,” thus giving it a variety of ill effects.

Water softeners are quite popular amongst Medinah homeowners, as Medinah water is inundated with calcium and magnesium. If you want to avoid the effects of hard water, we strongly recommend installing a water softener.

Next up is the chlorine injection system. This system injects small amounts of chlorine into water as it passes through. It’s generally used in tandem with well water, as city water is generally already void of the contaminants that these systems eliminate.

Its benefits are essentially identical as well. It removes hydrogen sulfide, iron, manganese, and bacteria, thereby offering the same benefits offered by the chlorine injection system. Again, it’s most typically used in tandem with well water.

For more information on these two systems, give us a call. We can explain everything you need to know.

The iron filtration system is a non-chemical system that removes iron and manganese from water. Like the chemical injection systems reviewed above, it’s most commonly used in tandem with well water.

The last system we’re going to discuss is the reverse osmosis system. This system removes essentially every contaminant imaginable — from minerals, to chemicals, to bacteria, and more. In doing so, it makes water highly pure and drinkable.

Looking to Install a Water Conditioning System in Medinah, Illinois?

Are you interested in purifying your water? Looking to install a water conditioning system in Medinah, Illinois? If so, we here at Johnson Water Conditioning are the people to see.

We offer a variety of water conditioning systems, including all of the systems reviewed above.