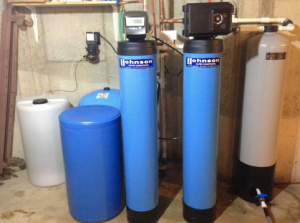 Barrington’s water is filled with a variety of contaminants. As such, Barrington residents often end up utilizing a number of water purification systems. These systems improve not only the taste of water, but the smell and functionality as well.

Looking to utilize water purification in Barrington? Wondering what’s available to you? This article has you covered.

Here in Barrington, water is filled with an excess of calcium and magnesium. As such, it is notably hard. The problem with this? In addition to causing mineral buildup on pipes and appliances, it also has an adverse effect on the hair and the skin.

For this reason, many Barrington residents choose to do away with hard water by installing water softeners in their homes. Utilizing the ion-exchange process, water softeners remove all traces of calcium and magnesium from water, making it soft and eliminating a number of contaminants.

When it comes to obtaining pure drinking water, there’s no better system to use than the reverse osmosis system. This system removes essentially all contaminants from water a supply, making it as smooth and as drinkable as possible.

Reverse osmosis systems consist of between 3 and 7 filters, each of which serves its own purpose. Whereas the pre-filters remove sand and sediment, the membrane and post filters are responsible for removing chemicals, minerals, and bacteria.

These systems aren’t typically used to accommodate a whole home’s water supply. However, they serve as terrific supplements to water softeners and other systems.

If you get your water from a well, it’s likely filled with a variety of contaminants — many of which are not usually found in city water supplies. Some of these contaminants include iron, manganese, hydrogen sulfide, and coliform bacteria. Together, these contaminants carry a range of negative effects, from poor smells to poor tastes, to water staining capabilities, and more.

Fortunately, there’s a system that can eliminate all of these issues. That system is the chlorine injection system. This system periodically pumps chlorine into its corresponding water supply, neutralizing the contaminants reviewed above and vastly improving its quality.

If you want your home’s water to as safe and as clean as possible, this is a system you should consider.

They offer the same general results: the removal of iron, manganese, hydrogen sulfide, and coliform bacteria. For more information on the two systems, give us a call!

If you own a restaurant, you likely also own a commercial dishwasher. If you want your restaurant’s dishwasher to be as efficient as possible, it’s recommended that you install a hot water softener.

Hot water softeners operate in the same way as standard water softeners. The only difference is that they’re geared to cater to hot water. In addition to improving the efficiency and lifespan of commercial dishwashers, they also allow for a more thorough wash.

In Need of Water Purification in Barrington, Illinois?

Are you interested in installing any of these purification systems reviewed above? Are you in need of water purification in Barrington, specifically? If so, we here at Johnson Water Conditioning are here to help.

Whether you need a water softener, a chemical injection system, or a reverse osmosis system, we can accommodate you. Contact us today to get started!