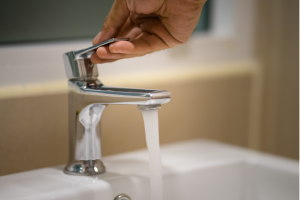 Fortunately, you don’t have to live with hard water in your home. In fact, there’s a fairly simple way to eliminate it — all you have to do is install a water softener. Wondering if it’s the right decision for you? Here are four benefits of installing a water softener in Wheaton, Illinois.

One of the main benefits of a water softener is its ability to prevent limescale buildup. Limescale is a white, powdery substance that appears on sinks and showerheads. In essence, it’s a small deposit of calcium and magnesium particles that are left once water evaporates.

Now, limescale buildup itself isn’t harmful. However, it can drag down the aesthetic of your property. As a result, many homeowners choose to eliminate it altogether. By installing a water softener, you’ll never have to deal with it again.

In addition to building up on sinks and showerheads, calcium and magnesium can also build up on the insides of pipes. Over time, this can restrict a water pipe, preventing the flow of water.

In some cases, mineral buildup can become so severe that the water pipe ceases to function entirely. If this were to happen to your pipes, you would need to have them replaced (which is a very expensive project).

The better option is to install a water softener. A water softener will remove the calcium and magnesium from your water, preventing mineral buildup in the first place. With a water softener in your home, your pipes will be preserved for the foreseeable future.

3. A Water Softener Protects the Skin and Hair

The human body benefits from a water softener as well — especially the skin and hair. Calcium and magnesium have a tendency to stick to the skin and the hair, and in doing so, they clog skin pores and cause the hair to become rigid.

This prevents the skin from secreting important body oils, while also causing the hair to become dry and brittle. For the skin, this can eventually lead to acne, rashes, and, in some cases, eczema. For the hair, this can lead to split ends and broken strands.

Want to avoid these negative effects? A water softener will help.

4. A Water Softener Allows Appliances to Run at Optimal Efficiency

Hard water can create issues with water-based appliances as well. Sure, they can still handle it, but it can cause appliances to breakdown much sooner. This, of course, is due to the presence of calcium and magnesium.

When calcium and magnesium run through a dishwasher, a washing machine, or even a refrigerator, it places strain on its inner mechanisms, causing it to run at less than maximum capacity. This not only causes it to use more energy, but it also causes the appliance to deteriorate quicker than it otherwise would.

The solution to this problem? Installing a water softener!

Looking to Install a Water Softener in Wheaton, Illinois?

Want to get rid of limescale buildup? Worried that your pipes might become clogged with calcium and magnesium? If you’re interested in installing a water softener in Wheaton, then Johnson Water Conditioning has you covered.

We carry a range of different water softeners, each of which is designed to eliminate calcium and magnesium in their entirety. Contact us today to discuss your needs!