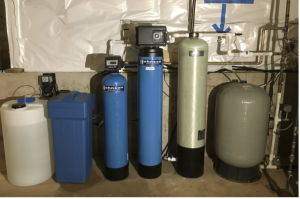 Water is filled with all sorts of contaminants — some of which are inconsequential, and others of which can have negative effects. As a result, many West Dundee homeowners choose to install water conditioning systems to treat their water supply.

Are you hoping to remove contaminants from your water? Are you curious about the different types of water conditioning systems that are available in West Dundee? We’re going to review your options below.

The water in West Dundee is some of the “hardest” in the country. It’s filled with calcium and magnesium particles, giving it a number of undesirable effects. For instance, not only does hard water cause skin and hair issues, but mineral buildup inside of pipes as well.

This is why water softeners exist. A water softener is designed to remove calcium and magnesium from hard water, making it “soft” and taking away the negative effects mentioned above. As one of the most popular water treatment systems in existence, water softeners are very common in the West Dundee area.

Would you like to have a continuous stream of clean and pure drinking water in your home? If so, you should consider installing a reverse osmosis system. These systems remove essentially every contaminant from a water supply, leaving it as drinkable as technologically possible.

Small and compact, reverse osmosis systems can be installed underneath sinks and inside of cabinets. Easy to maintain, they typically only require filter changes every year or so.

Fortunately, there’s a water conditioning system that can eliminate these four contaminants. That system is the chlorine injection system. This system pumps chlorine into its corresponding water supply, neutralizing the above-reviewed contaminants and ensuring that the water is safe for consumption.

You can learn more about this system and the chlorine injection system by giving us a call!

The last system we’re going to discuss is the iron filtration system. This system is a non-chemical system that — like the chemical injection systems discussed above — removes iron and manganese from a water supply. As such, it takes away metallic tastes and reduces water staining capabilities.

The iron filtration system is most commonly used with well water, as most city water is already treated to remove excess amounts of iron and manganese by the time reaches your home. It is sometimes used in tandem with a chemical injection system, though many homeowners use it on its own.

We have installed water conditioners in countless homes throughout the West Dundee area. Regardless of the system you’re looking to install, we are here to help. Contact us today to discuss your needs!